Geronimo! Welcome back to a special MOVIE REVIEW! This was a good way to end my summer holiday and now I’ve started college again. Woo! Doesn’t time fly when you’re enjoying yourself? So fez up, straighten your bow-ties and as River Song would put it, “SPOILERS!” 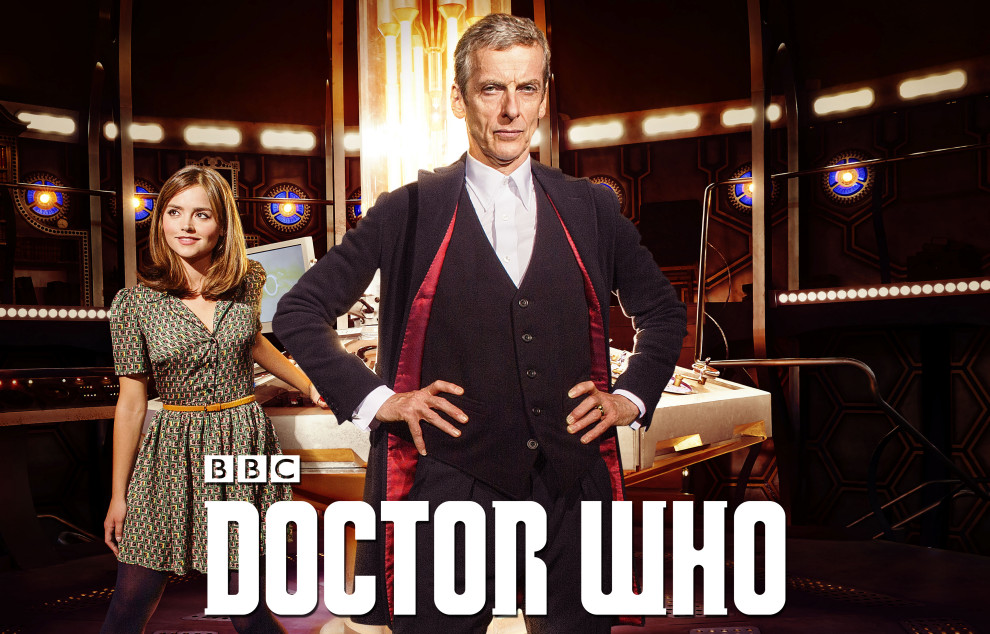 I got my ‘Back to the TARDIS’ t-shirt on, ready for the 80 minute long DOCTOR WHO: DEEP BREATH episode!! Specifically, season eight’s first episode, featuring Peter Capaldi as the new Doctor. After a Tyrannosaurus Rex vomits the TARDIS in Victorian London, the new Doctor is reunited to the world and the old London gang: Madame Vastra (a Silurian warrior), Jenny (her lizbian partner) and Strax (Mr Potato Head). The Doctor’s mind is scrambled from post-regeneration, Clara is confused at what’s going on, and there are clockwork cyborgs roaming around London killing innocent civilians and dinosaurs. There is only one man for the job, but we’re all unsure what he’ll do. Who is this Doctor?

We five whovians decided to do things properly and see the episode at the Glasgow Film Theatre (GFT). I’ve always loved this cinema; it’s got something you don’t get with most cinemas; sophistication, history, quality – all in HD. We managed to get relatively centre seats, but they were right at the back. There wasn’t that much legroom either, even compared to Odeon, and it was quite stuffy; was hoping there’d be air-conditioning. That aside, once we got past the quiet adverts and into the feature, it was amazing! As I’ve said in previous reviews, only a few cinemas have really loud sound now a days and the GFT is one of them. I was fully immersed in the episode and was in awe!

Before the episode started, cinema viewers got a five minute film of Strax taking the mick out of all the Doctor’s regenerations before the new one arrived; like the third being “a tragic hybrid: half man, half granny”, the seventh being too small, and the ninth for being “all ears”. Strax was hilarious in this and in the episode. As far as the new intro goes, I am half and half about it. I had goosebumps at the start with the neon cogs and the swirling timey-wimey clock, but then the music got too tingy and high-pitched; I loved the previous intro and it’s music but I’m just a bit wibbly-wobbly about this intro’s music. It is brilliant to find out it was inspired by a fan-made video though – Steven Moffat liked what he seen and decided to use it as inspiration. The dinosaur was a great way to start off the episode with its spine-tingling roar next to Big Ben, but it only lived for the first few minutes of the episode so didn’t have much significance to the overall plot. No. The Doctor’s real problem was the head cyborg!

With Doctor Who you get your fair share of scary monsters, and this episode’s baddy was brilliant. The unnatural movements, the half clockwork face with fresh human eyeballs, the staring, the sinister monotone voice, the detachable (still moving) hand replaced by a flamethrower. And not to mention the creepy hot air balloon made entirely out of skin. All in all, the full definition of a scary villain. The scene where Clara has to take a ‘deep breath’ to avoid being caught, was done terrifically; I loved the increasing music, Clara’s heartbeat, and the colour distortions the longer she held her breath; it was quite an intense moment! But the one scene that almost brought a tear to my eye was Matt Smith’s phone call. There wasn’t a proper closure between him and Clara in his last episode, so I’m really glad they settled things between them, and afterwards Clara hugs the current Doctor accepting him as ‘the Doctor’.

Peter Capaldi did superbly in his first full episode as the Doctor. There’s more unpredictability with this Doctor, which is good, but maybe that’s just because it’s the first episode; hopefully not. He isn’t too sure of his deductions as he usually is, so it’s quite hard to know if he’s just guessing. David Tennant and Matt Smith I felt were too similar, but Peter has brought a more mature, but darker, side to the role; it was very shocking when he leaves Clara to the cyborgs, and fans may never know if he murdered the cyborg or if the cyborg killed itself. I feel his dark side will increase as the series goes on. This Doctor is Scottish as well! And not just a Scottish actor putting on an English accent like David, but is actually Scottish! He “can complain a lot now”. He also changed his outfit and the TARDIS’ appearance…well a bit. His clothing is definitely different – the red inside of his jacket, its modern and still traditional look, but there’s really nothing different with the TARDIS apart from one or two different colours.

In this episode there are plenty of references to older incarnations and episodes; Peter rejecting to wear a scarf, saying he wanted more ‘round things’ in the TARDIS, and even saying he recognised his face, possibly referring to Peter Capaldi’s first appearance in the Doctor Who episode, “The Fires of Pompeii”. It could go further into detail how he got his face as we go through the series, but we don’t know for certain. The funniest reference by far though is when Clara drops the sonic screwdriver and the Doctor thinks out loud, “It’s at times like this, I miss Amy”.

As usual with the episodes, we got a teaser at the end showing Clara and the Doctor facing the Daleks in the next episode. Intriguing; I’m definitely hooked after this episode anyway. But there are many questions we are all asking on the lead up to the next episode. Who is Missy; the Doctor’s supposed girlfriend? Did she add the message in the newspaper? What is the Promised Land? What is this new Doctor truly like? And Steven Moffat’s reply to all these questions is you’ll just have to keep watching Doctor Who to find out.

The Glasgow Film Theatre didn’t disappoint as usual. Was too immersed with film to care that there wasn’t any legroom or there wasn’t any air-conditioning. Like laughter eases pain, awesomeness eased the tetchiness. And the episode was fantastic; the acting by Capaldi, Coleman and Ferdinando (head cyborg), the directing by Ben Wheatley, and the humour and darker parts that were well balanced. It was a really good episode!

That’s me for just now. Until next time, I don’t want to go.

Guardians of the Galaxy

What We Did On Our Holiday