A few weeks ago, my friend Anthony Chalmers and I went to see the animated film, Batman: The Killing Joke (see my review of it here). It’s always a pleasure to hear Mark Hamill voicing the Joker (in the TV shows and the Arkham games) but especially brilliant in this adaption of the most popular Batman/Joker graphic novel of all time! There is a monologue in the graphic novel/film where the Joker talks about memory and madness, and it really symbolises what the Joker stands for and is all about! So while I was trying to perfect my impression and memorise the monologue, Anthony and I decided to create a short film based around it. You can see it below:

Overall, it took about 5 weeks working on this project. We spent the time looking for objects that could be associated with the Joker and the monologue, preparing for the different shots and I personally aimed to perfect my Joker impersonation (found out that lying on my back helped emphasise the raspiness of the voice). We also decided to include scrawlings on a noticeboard and notebook that the Joker would do, so I came up with ideas and doodles of what they could look like. Then we staged the desk and background with everything for all the shots and got to filming. 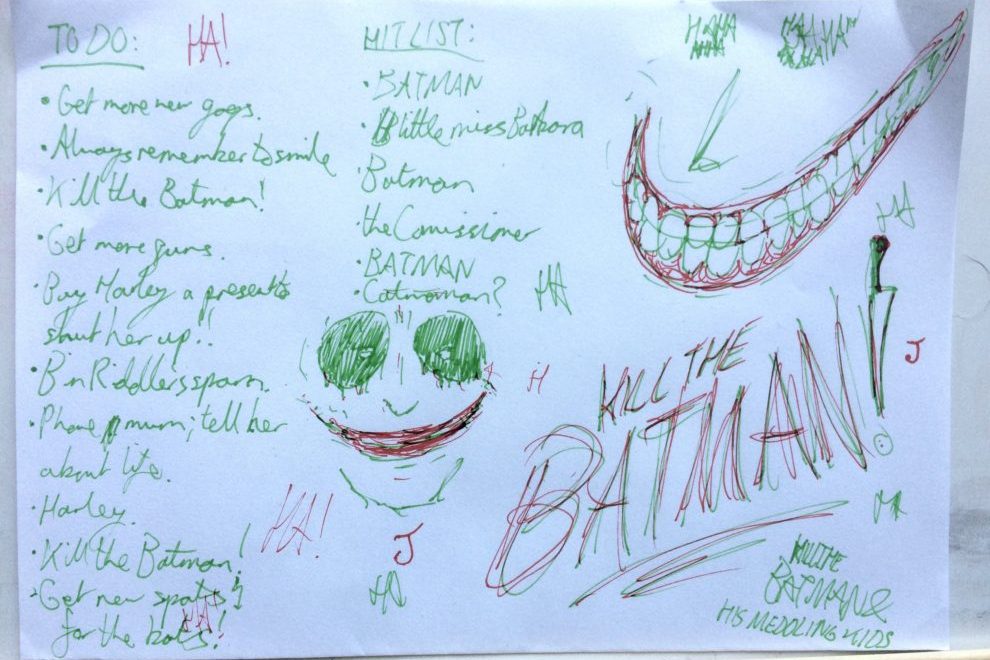 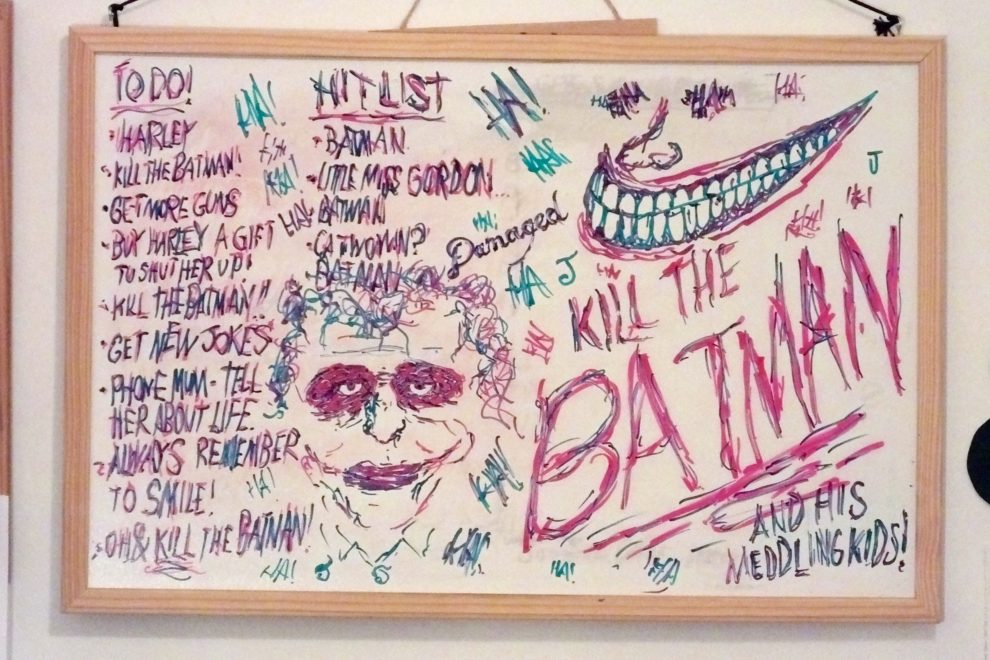 I took about an hour and a half to film everything. There were one or two shots which were hard to film and took a while: the second scene where it pans to the bucket with a photo frame on the side. Trying to make sure the skateboard, which the camera was on, went exactly the right way took a few takes.

And the very last scene with the blue lights, full desk and jacket coming over; the two of us and my brother Calum took turns standing outside the window holding the 2 blue police lights in the air for each take. Thankfully no one passed by during that time to raise any concerns with us. The problem was trying to get the jacket to sweep over the camera at the right time and pace, covering the camera so that the shot went to black. We eventually got it though.

Then came the mind-numbing editing which we almost went mad over! We managed to sort out the clips and arrangement pretty quickly within the speed and capabilities of the computer. We both have an adoration for all Christopher Nolan films (Inception, Interstellar and of course the Dark Knight trilogy) and thought the typographic style of his films would look really nice for the title and credits: bold sans-serif font with the wide tracking and lots of white space around it. But for the credits we thought why stop there and wanted to continue the same eerie feel as the rest of the film. Simply by tracing scrawlings over the text and adding it on top of the normal text, to make them twitchy and distorted. We love the way it turned out.

Batman: The Killing Joke is definitely worth a read if you haven’t already! Below are excerpts from the graphic novel of the monologue we have chosen. To give you context, Joker has kidnapped Commissioner Jim Gordon with the intention of driving him insane to demonstrate that one bad day can drive any normal person to pure madness. 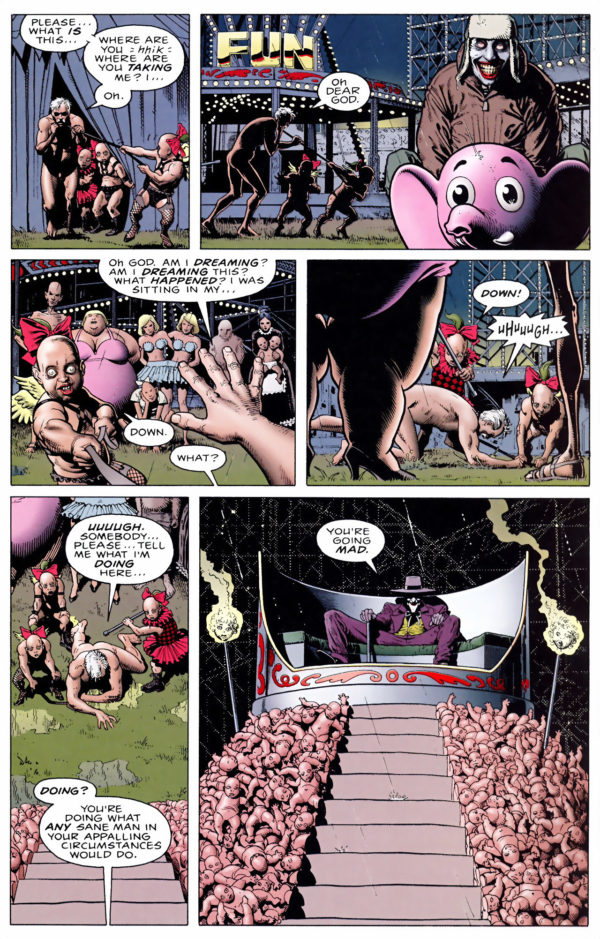 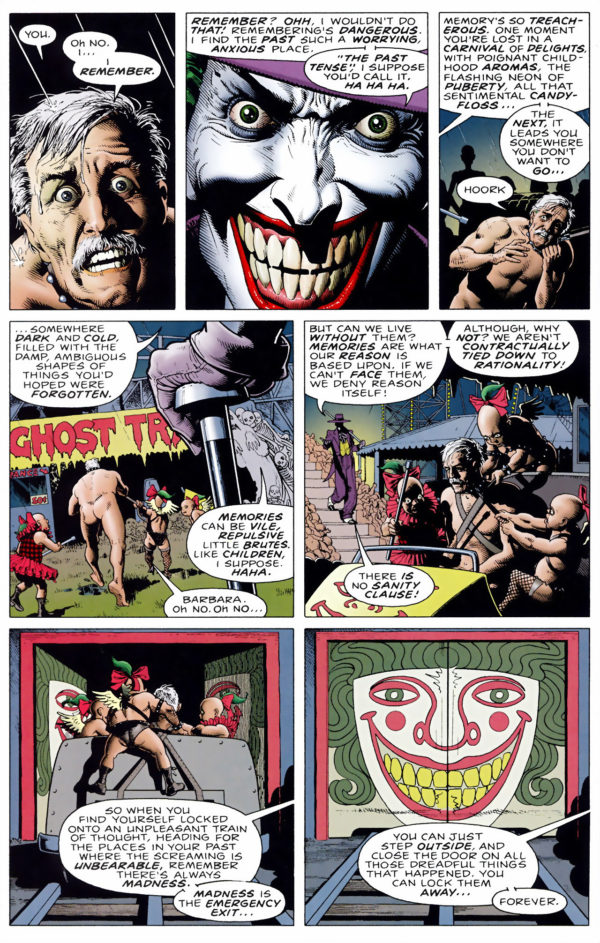 As well as this new film, Anthony and I decided to move on from our LAWKI films name and create a new identity for this and any of our future videos: “Red Button Productions”.

It’s taken us years to come up with a good name and logo for ourselves and have came up with some corkers in the past (ranging from “Drivel”, “Specs and Suits” and our previous identity “Life as we know it”). Suddenly this name popped into my head and there are several ideas that resolve around it: we’re quite old fashioned at the best of times so a rustic button looks really nice in our book; red button in filming often refers to the record button; and lastly the look of the button almost looks like a film reel. Pretty nifty, right?

Please leave your comments below or on our Red Button YouTube page. We’re happy to hear what your thoughts are about the whole film. We hope you enjoyed it as much as we did creating it! Below are links to our social media pages: